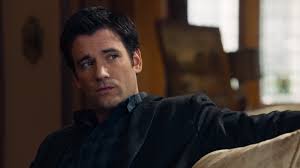 In many ways Tommy was a mirror to Oliver, their friendship evidently supposed to have been a long running thing, and the two characters shared a love of the high life before the island. However when Oliver returns, obviously the relationship shifts, it’s the result of both Tommy’s feelings for Laurel, and the fact that Oliver has taken on the mantle of the Hood, in a bid to honour his father’s mission. They can’t be as open with each other as they used to be on either side.

Tommy’s a uncomplicated good man, who obviously still likes to go and have a drink. He has been part of the Queen family even when Oliver was missing, it’s made clear by the fact that he is included in the family dinner when Oliver finally returns home to the mansion. Clip uploaded by Arrow CW.

I liked the fact that they showed flashbacks between him and Thea, revealing how deeply he cared about the younger girl, at the time when Oliver was still believed to be dead. It says something about the loyalty that Tommy possessed, and he was evidently very protective of her, clip uploaded by ibzer275.

The emotion that connected Tommy to both Laurel and Oliver was primarily love, he loved them and they loved him, even with the very complicated romantic history between both Tommy and Laurel, and Oliver and Laurel, clip uploaded by Niamh Blue. Mind you I think love was probably the thing that kept Tommy going, during the five years that his best friend was lost.

I like the fact that the writers sort of made Tommy into Oliver’s conscience, during the Three Ghosts episode, and that Tommy still gave Oliver strength and purpose clip uploaded by Bryant Ling