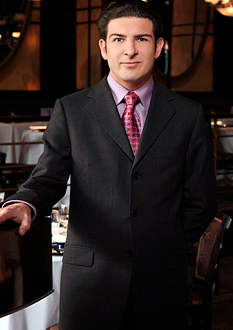 Jean Philippe seems to be a very empathetic and patient person, which makes sense in the career that he’s chosen as a maitre d’. He out of the three that have filled the role on Hell’s Kitchen has been the one that interacts the most with the contestants, well in terms of the footage I’ve seen anyway. He is clearly professional, but has cracked a few times, making him quite humorous, particularly when he interacted with the event planner, and Lacey from the fifth season.

He was also instrumental in calming down contestants when Ramsay had kicked them out of the kitchen. Andrea (season 5) seemed to be on her way out of the door, before Susilovic intervened, and talked to her.

He’s gained quite a following online, and I found these two videos, detailing some of his best moments in the show.

Part 1 of the compilation by Katie G

Part 2 of the compilation by Katie G