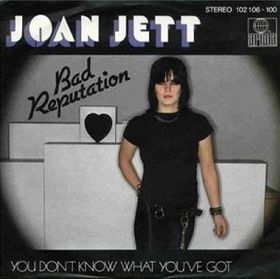 Joan Jett and the Blackhearts

I love this song, because of the beat, and the lyrics. There’s a lot to relate to, in the lyrics, which are all about being strong despite what others will think. ‘I don’t give a damn about my bad reputation’. I think Joan Jett’s voice is incredible, so much anger and self confidence in every word.

The first time that I heard this song was in ‘Ten things I hate about you’, it’s used to introduce Katarina Stratford, in the modern adaptation of Taming of the Shrew. Video posted by Lucas S

It’s been used for tribute videos for a lot of strong independent female characters in film and tv. This is one I particularly like though, Evilsheep24’s Video for Lois Lane (Smallville)

It’s one of the most empowering songs I’ve heard.