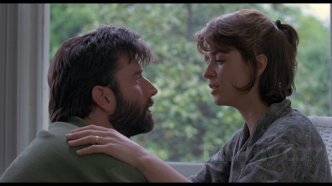 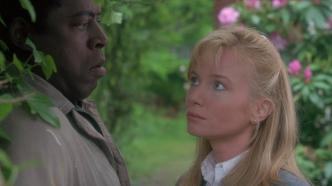 The Hand that rocks the cradle

I watched this film many years ago, but Rebecca DeMornay’s performance is still fresh in my mind. She plays a woman who loses her husband, and her baby in quick succession. Her husband was a obstetrician and a repeat sexual offender.

The basic plot is that a pregnant woman (Annabella Sciorra) is assaulted by her doctor, and tells her husband. Her husband encourages her to report it, and it causes the doctor to commit suicide. His widow (Rebecca De Mornay), loses everything, miscarrying their child when she hears the news. She discovers who first accused her husband, and takes the position of nanny to the family, under the assumed name of Peyton, in a bid to destroy their lives.

The film is a basic revenge flick, but contains enough good scenes, to make fans of such things happy. Rebecca DeMornay delivers a great scenery chewing performance, and she is supported by Ernie Hudson, who plays a handyman who doesn’t possess much intellectual or emotional development. I felt so sorry for Solomon, who is another victim of Mrs Mott’s machinations. He grows close to Michael and Clare’s elder child, and is accused of molesting her, after Mrs Mott places a pair of the child’s knickers into his tool kit.

There are several violent scenes, most obviously the finale, during which the villain gets her comeuppance by falling to her death. I thoroughly enjoyed it, but some of the performances were clearly less memorable than others. I didn’t realise until I read the cast list that Julianne Moore played Claire’s friend, and one of Peyton’s victims.

I do remember the scene in which Peyton rids herself of the friend, as she rigs a greenhouse and it’s a particularly memorable death even in a horror movie.