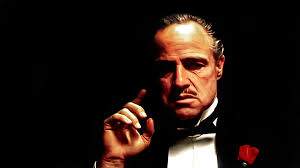 “I’m gonna make him a offer he can’t refuse”

The book of the Godfather is remarkable, packed full of colourful and interesting characters in a backdrop of a intricate web of story lines, but the film more than lives up to the depth of character created by Mario Puzo. The performances throughout the film, are wonderful, and I’m not surprised that it still heads the top of many people’s best film lists.

Most people can quote the above line, and are familiar with the scene involving a horse’s head. It’s been parodied in lots of different ways, throughout the years.

I love the fact that despite the brutality of the violence, there is a real sense of love when the Corleone family are together. The wedding scenes, in which Don Corleone interacts with his children, show that effortlessly. I haven’t seen all that many of Marlon Brando’s performances I’m sorry to say, but in my opinion, he is pitch perfect throughout the film.

I felt for Michael, as well, Pacino showing all of the conflicts inherent in his character. He wants to be with Kay, and live a ordinary law abiding life, but the fact is that he is the only one that could possibly take over the family business after Don Corleone dies.

Sonny is too vicious, ruled by his emotions rather than his head, and Fredo would never be able to gain the respect of the heads of the other families. I adored the second film as well, following the story line with great interest. It was just a shame that the third film didn’t reach the same dizzy heights of creative perfection.

One thought on “Films beginning with the letter G”