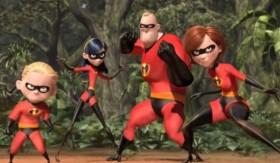 I have to confess to being a fan of this movie, despite it being a animated film. I loved Edna in particular, the acid tongued and angry seamstress making me laugh each time that she appears on screen. She has limited screen time, but still gets some great lines, such as ‘I never look back darling. It distracts from the now’

I liked the broad characters of Bob, Helen, Violet, Dash, and Jack Jack. I think most viewers could find something relatable in the characterisation of one of the family. The dinner scene revealed the things that each character was going to resolve by the end of the film, as we saw that Bob was still searching for crimes to stop, Dash wanted to compete in races like the other boys, and Violet was harbouring a crush on one of her classmates.

The superhero characters that we meet are all engaging and funny, which made me enjoy watching the journey, but I have to confess I had a particular soft spot for Violet. She might be a stereotype, but most girls who were a little shy and unsure of themselves during their pre teen years will relate to her, and the scenes that she shares with her family and Tony (the crush).

I also enjoyed the scene between Frozone and his wife, a unseen character during the final showdown with Syndrome, the film’s bad guy. It was realistic, and greatly funny, as she wants him to stay for a dinner, while he searches for his supersuit. She finishes the discussion with one of the best and most memorable lines I’ve ever heard in a animated movie, ‘Greater good?’ I am your wife! I’m the greatest *good* you are ever gonna get!’