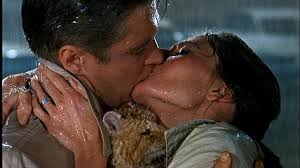 A friend of mine, recently went to New York, and it got me thinking about this film again. As well as asking her if she was going to go to the standard tourist spots, such as the Empire State Building, the Statue of Liberty, and the monument to the Twin Towers, I wanted to know if she was going to have Breakfast at Tiffany’s.

It’s a measure of how iconic the film is, and the opening sequence in particular, because I wasn’t born until 1982, and still know the film intimately. I think it’s Audrey Hepburn’s performance, the warmth which she exudes, which anchors the less than likeable elements. I mean the characterisation of her upstairs neighbour played by Mickey Rooney is very much of it’s time, and adheres to all the negative stereotypes about Asian people.

I came later to the book, than I did the film. There are many differences between Capote’s novella, and the film. I didn’t expect for instance that Holly was going to end up in Africa, and there was a distinct lack of romance between the two within the novel.

I do wonder some times what the film would have been like if Capote’s first choice for the role of Holly Golightly, Marilyn Monroe would have won the part. I don’t doubt that she would have been able to express the vulnerability, but the vibrant sexuality that she exuded was, in my opinion too much for the role. The original character as written by Capote, was a teenage bride who ran away from her much older husband, and was only close to her brother in her immediate family.

Only some of those elements are carried forward into the film, such as the fact that Holly’s brother is away in the army, and the emotional depth that Hepburn displays in the scene when Holly learns of his death, is touching and upsetting, no matter how many times I have viewed it.

There’s something emotionally raw about the screen version of Holly, especially within that scene, that is incredibly endearing. I found myself rooting for her, and hoping that she would be able to find her true place in the world.

I also liked the fact that there was a sort of equality between the sexes. Both Holly and Paul, the two leads are technically being paid for their company. Paul is involved in a relationship with a older woman, who pays for a good deal of his essentials, acting as a kept man. Holly receives money from gentlemen every time that she goes to the powder room, and is also involved with a gangster.

I think that Breakfast at Tiffany’s will always be ranked in my top ten films, and that Holly Golightly, even with all her flaws is always going to be one of my favourite characters.