I honestly don’t know quite where to begin, with this character. Oh yes I do, she’s one of, if not the best female character I’ve seen appear on television in the last few years. She was only intended to be a one episode character, as most people who watch Arrow, know, but she has grown to be the heart of Team Arrow.

Like a large number of Arrow viewers, I was captivated by the babbling, and clearly intelligent IT girl from the first few moments of her introduction. It seemed to be a entirely different portrayal of a woman, or any character yet on Arrow. Moira Queen and Laurel Lance, two of the other regulars were presented as very polished ladies, with a capacity for sharp retorts, and a anger underlying a good deal of their interactions. It was understandable anger for Laurel, considering how much she had lost in her recent backstory, but Felicity’s interaction with Oliver was distinctive from the first ‘Felicity Smoak? Hi I’m Oliver Queen’.

She is highly intelligent in various areas, possessing a extreme proficiency in hacking computer systems. That intelligence means that she doesn’t believe any of the admittedly rather weak cover stories, which Oliver and Diggle both feed her in the first half of the first season. She possesses a keen emotional intelligence as well, often intuiting different emotions within Oliver, without even looking at him.

Her keen curiosity leads her to ‘hate mysteries, they bug me, they need to be solved’. 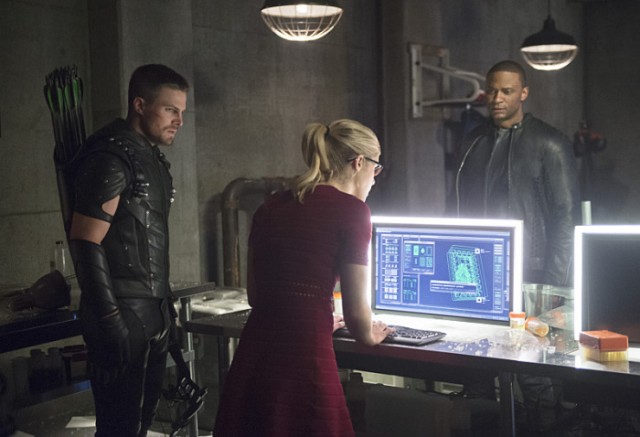 I think that the dynamic which exists between her, Oliver Queen and John Diggle, quite often is the best written trio within American fantasy/ science fiction television, since Buffy Summers, Willow Rosenberg and Xander Harris. It seems believable that the two jaded men, who have been through a number of brutal battles, and experienced some of the worst that humans are capable of doing to each other, would be drawn to Felicity, who has been through her share of horrific experiences, but has chosen to maintain a sunny positive outlook.

Which doesn’t mean that she’s shy about making sure either man knows when she is upset about something. She possesses a backbone of steel, refusing to back down to Oliver, and displays it from the first time that she’s officially a member of the team. https://www.youtube.com/watch?v=plCa3V4F1iI&index=20&list=PLz9r2Z4ARAw0GW0zTkgFvqhii9Op4-_6D, (published on youtube by Olicity Queen) Felicity refuses to accept Oliver going after Ken Williams, a man who has made bad choices in his professional life, but who also is a single father raising a son, and overrides the Foundry lock in a bid to make her case. This slight and petite girl, doesn’t back down, even when Oliver attempts to intimidate her, by leaning directly over her with his greater physical mass. That is the action that earned her a permanent place in my affections, but there are so many other reasons why I will always have respect for the writers who initially created this version of her. I know that there is a Felicity Smoak in the Firestorm comics, but I don’t think that she bears much resemblance to the Arrow version.