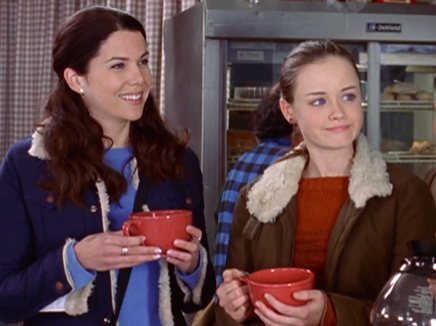 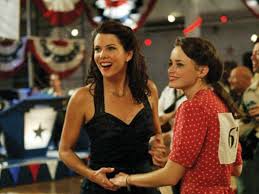 In many ways these two characters have the best mother daughter relationship that I’ve seen on television. There’s nothing that Rory can’t tell her mother, they share many tastes such as fast food, television and both talk very quickly.

One of the funniest and sweetest moments in the first season was the scene when Lorelai tells Rory the story of her birth, on her birthday, Uploaded by Samantha Fagan, it’s evidently meant to be something that happens every year, as Rory repeats certain sections of the speech.

It’s endearing, how close the pair are, probably meant to be a aftereffect of the fact that Lorelai raised her daughter alone, and that she was only a teenager herself when Rory was born. Her energy evidently has rubbed off a little on her daughter, as well as her addiction for coffee, as shown in this clip uploaded by TrueKazam.

They take care of each other, even through their romantic disappointments, in a particularly sweet moment, after Lorelai and Luke have ended their relationship, Rory rushing right home to be with her mother.

I found the season six fight, to be realistic as even the closest mother and daughter occasionally have disagreements, and evidently Rory needed to find her own way through her confusion. The reconciliation between the two in season seven was beautiful, and so sweet. I can’t help it, I tear up a little most times that I watch it, clip uploaded by beth dawson.

The speech that Rory delivers at the farewell party thrown for her by Luke, which she aims at her mother, is another tear inducing moment, that the two actresses deliver perfectly, clip uploaded by Ruth Smith.

From the first moment that I saw the two on screen, I bought them as mother and daughter, their relationship was so well written, and the actresses seemed to embody the roles very well. It was a great last scene as well, clip uploaded by mother of dragons.

My favourite fan videos for them

Fan video made by luvtheheaven5