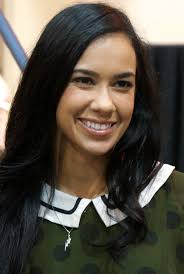 AJ Lee’s great because she’s sort of seemed to have been a female version of Dean Ambrose. Her relative small stature in comparison with the other female wrestlers, didn’t hold her back, as she held the DIVA belt more than once. She doesn’t let insults go unpunished, as is shown in this clip uploaded by WWE, where she attacks Vickie Guerrero.

There was something endearing about the fact that she skipped about, and to a certain extent played up her petite stature. However this has to be one of my favourite in ring moments of hers AJ and CM Punk vs Daniel Bryan and Kane.

I admire the fact that she clearly worked her ass off, and she seemed to me to be one of the most entertaining wrestlers, particularly when paired with Paige and CM Punk. She and Paige teamed up to fight the Bella twins more than once, uploaded by Paige Knight. It was fitting in a way, that seeing as Paige’s first match was against AJ, and the two had been the ones that were most vocal about pursuing the DIVA belt, that AJ’s last match had her teaming up with Paige, against the Bellas, uploaded by CM Punk

AJ and Kelly Kelly vs Natalya and Alicia Fox