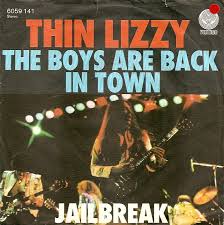 The Boys are back in town

‘I still think those cats are great’

This song always reminds me somehow of sixth form. At the time I was friendly with a group of upper sixth boys, who behaved somewhat like the gang described in the lyrics. They were a exuberant bunch of lads, and were always doing something that they probably shouldn’t have been doing in the sixth form centre.  The song is filled with the same exuberance, and fun that I remember those lads possessing, and it always makes me smile no matter how many times I listen.

Uploaded by DoctorwhoXMangafan2: Video from A Knight’s Tale