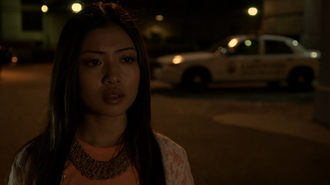 I liked most of the characters in the Scream film franchise, and was expecting the television versions to be more of the same. Riley was my favourite of Emma Duvall’s friends (the TV version of Sidney Prescott), she’s sweet, funny and loyal, with a tendency to believe in people wholeheartedly. She’s clearly designed to be intelligent, and interested in gaming, astronomy, horror tv, and crime. The relationship between her and the stereotypical geeky male Noah, is also quite sweet in tone, but still believable in my eyes.

I was genuinely a little upset by her death, as I was hoping that she would manage to make it to the final episode at the very least. Riley’s death scene