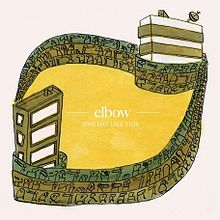 My first knowledge of the song, was when it was used on Comic Relief a few years ago. I’m not really that familiar with Elbow’s back catalogue, and probably couldn’t name that many of their songs, but I have to say I do love the way that Guy Carvey’s voice sounds slightly wistful through this song. The song is effortlessly beautiful and soothing, with a optimism running through the lyrics.