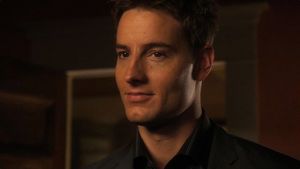 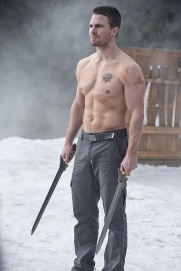 There is a lot of differences between the two live action television versions of Oliver Queen. I didn’t read the comics, so Justin Hartley’s portrayal in Smallville was my introduction to the Green Arrow and Oliver Queen. I liked him a good deal, from the first moment that he and Lois Lane spoke. Very sweet 1st meeting. Hartley’s obviously a very attractive and physically fit man, and more than that, the character is charming, funny and generous. Lois apologises to Oliver for mistaken identity

He is written as a determined, and funny bloke, and I enjoyed the relationship between him and Lois a lot. I know that Clark and Lois are a iconic relationship, but the banter between Oliver and Lois, was funny, and sexually charged. Not to mention the fact that obvious Erica Durance and Justin Hartley are very physically attractive and make for a striking on screen couple.

Smallville didn’t have Oliver on the island for quite as long as Arrow did. I think that he might have only been there for two years, and he has clearly maintained more of his sense of humour than Arrow’s version.

He confides in people quite easily, and builds up a strong relationship with Lois within a few episodes in season six. The bond between them lasts throughout the succeeding years of the television series.

I can’t imagine Arrow’s Oliver Queen dressing as a woman, even if it was in order to get out of a dangerous situation. Very funny scene. It suited Smallville though, as it was a much lighter toned show.

Arrow is dark in tone, and doesn’t really let Oliver Queen have many light lines. He is considerably more ‘damaged’ than Smallville’s version, having received scars and burns over a large swathe of his body, through the flashbacks we learn just how hard the five years being stranded were for him.

He is surrounded by characters who have light sides, and deliver the comedy for him. Felicity Smoak is the one that does that the most often. She, his sister Thea and John Diggle are the three that Oliver seems to rely on the most throughout the series so far, well after the death of his best friend Tommy Merlyn that is.

He has a sarcastic sense of humour, but possesses the same loyalty and protectiveness as his Smallville counterpart. We see the protectiveness time and time again when his loved ones are in danger.

His reactions to the events on the island, and the other things that he has been through, combine understandably to make him considerably less forthcoming than he was before. The writers allow him to slowly unbend, through his interactions with the two newcomers in his life John Diggle and Felicity Smoak.

I think in part the reason that he connects with them, is because evidently there is no preconceptions. They didn’t know him personally before he was shipwrecked, and so are learning who he is at the same time as the audience.

I like both versions, although I marginally prefer Amell’s portrayal, due partly because of the chemistry between him and Emily Bett Rickards. The broken man that he is shown to be when he first returns to Starling City seems to be more realistic, than coming back from such trauma mostly unaffected as Hartley’s version seems to be.