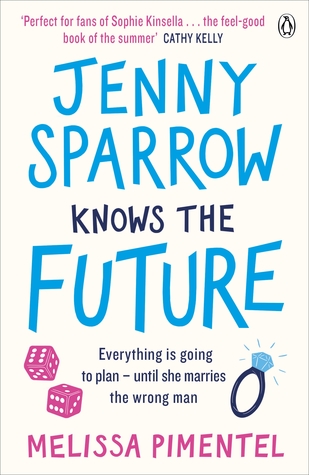 Jenny has lived her life according to a plan that she made when she was thirteen, and it’s now time for her to marry her boyfriend. However he instead suggests a break, after the dinner where she expected him to propose, and Jenny does go for a break with her best friend to Vegas. It seems like a good idea until she wakes up married to a stranger…

Pimentel creates a likable character in Jenny, although she is similar to other characters I have seen in this genre. The very reserved girl who has things a certain way is a staple, the difference that Pimentel includes is the backstory. She offers a variety of reasons why Jenny behaves this way, which range from dealing with her mother’s mental illness without much support, the illness becomes full blown once her parents’ marriage imploded.

Jenny’s marriage in Vegas allows her to relax and unbend, experiencing a more spontaneous life. Her husband Jackson comes to London in search of her, and it’s made clear from their first interaction that he has dealt with the issues of his past by going to the other extreme, he doesn’t tend to plan anything really. It’s the classic thing of two characters with seemingly incompatible lifestyles and perspectives coming together and discovering enough of a middle ground to develop a romantic attraction for each other.

Pimentel does deal rather abruptly with dissolving the relationship between Jenny and Christopher however. The reader sees how incompatible the pair are from Jenny’s point of view, but he does give in to her request to end things without any real argument or bewilderment. He is shown to care enough to propose to her when she returns from Las Vegas, and there is not shown to be much that changes from his perspective in the narrative, although Jenny does offer a number of excuses as she gets to know Jackson.

On the whole it’s a lighthearted and funny read that many people would do well to take to the beach with them. Pimentel writes in a similar way to Lindsay Kelk, and Sophie Kinsella so if you’re a fan of those two authors then Pimentel is a must read.