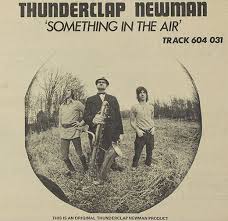 Photo credited to Steve Kelly, and viewed on 45cat website.

Something in the air

‘we’ve got to get together sooner or later’

I first heard this song on the Almost Famous soundtrack, and was unable to get it out of my head. It’s lyrics are all about trying to make the world a better place, talking about revolution and instigators but it’s not aggressive like some protest songs can be. There’s something almost hypnotic about the softness of the beat, and the singer’s voice.

Uploaded by The Best Of – Home Of Classic Music