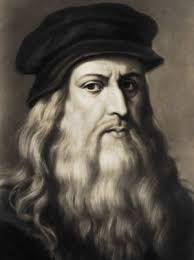 ‘It had long since come to my attention that people of accomplishment rarely sat back and let things happen to them. They went out and happened to things.’