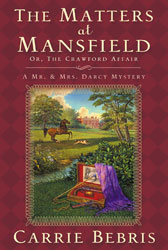 The Matters at Mansfield

Synopsis: Lady Catherine organises a marriage for her daughter Anne, but her plans are ruined when Anne elopes with Henry Crawford. Darcy and Elizabeth are involved in the pursuit, and discover them. However on their return journey both the Darcys and the Crawfords are obliged to stop in Mansfield, and things swiftly escalate as bigamy, mistaken identity and past adulteries come to light.

This is the fourth book in the series, and Bebris keeps her masterful grasp on the truth of Austen’s characters. Her original creation Meg, a lower class but practical and very good natured girl has several funny encounters with Lady Catherine, believing her to be suffering from memory loss among other afflictions.

It’s nice to see Anne de Bourgh taking a starring role in this book, Bebris giving her more to do. She was a very shadowy character in Pride and Prejudice, only mentioned as being sickly and confined by her mother’s overpowering will. Bebris has her taking control of her own life, both in her choice of marrying Henry Crawford, and other smaller rebellions earlier in the book.

Anne and Meg both are negatively affected by their interactions with Henry Crawford, who is almost exactly the same as he was in Mansfield Park. He is focused on his own pleasure, but has a darker ending than Austen gave him. Bebris gives him a similarly tense relationship with Lady Catherine, as he has with Mrs Rushworth and Mrs Norris, all three women trying to protect those in their family that he has injured.

Fanny Price, the heroine of Mansfield Park doesn’t make a appearance, although Edmund does. He and Fanny are married, and he is managing two churches. He makes a brief appearance, when Henry is confronted by his sister Maria before the inn, and Bebris reveals to the reader that Henry valued Edmund’s friendship, ‘A look of remorse indeed seemed to overcome him “Mr Bertram, I am sorry for my part in the events of last year”

The line also helps to anchor the action, for the reader. The action takes place two years into Elizabeth and Darcy’s marriage, but I was unsure when it was supposed to have been for the Mansfield Park characters.

This book is balanced, keeping the three different sets of characters, (Mansfield Park, Pride and Prejudice and Bebris’s original creations) interacting without any jarring dialogue. Bebris continually impresses me with her handling of Austen’s light style, and I really hope that she writes more of these, continuing them beyond the six novels that Austen completed.