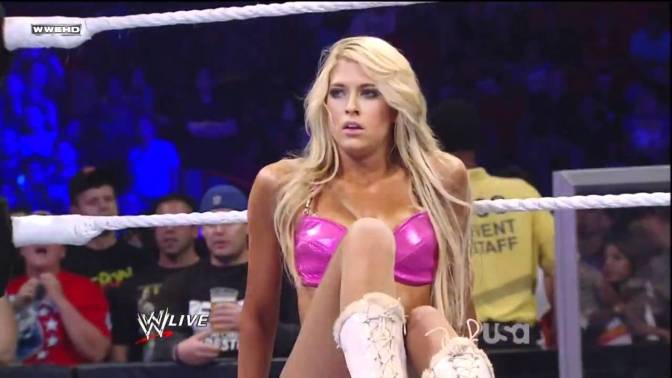 I only discovered Kelly Kelly through a clip of one of her matches, with Maria Menounos, but she was impressive throughout the match, and I checked out a few more. She obviously had a similar agility to Neville, and the move when she spins her opponents round, with her legs around their necks, is memorable. Match uploaded by WWE.

However it was the match when she was teamed with Edge, to defend his world heavy weight championship which I think was remarkable. She managed to defeat both members of Laycool and make sure that Edge kept his belt.  Match uploaded by TheCaptainMartin

She struck me as being as a cheerful and sweet natured girl, but one that didn’t allow anyone to take her for granted, or disregard her abilities. She competed for Edge’s Heavy weight belt, and the same episode included a conversation between the two, when she told him what she really thought, clip of Edge and Kelly’s conversation uploaded by trishandashleyfan1. She didn’t seem to have been very afraid of the superstars’ physical frames, given that she told Drew McIntyre off, after seeing him fighting another wrestler backstage, clip of Drew and Kelly’s conversation uploaded by WWE

I didn’t realise just how big a fan following she had on youtube, but here are some of the videos dedicated to her

Background song: something I need, video created by MasQueRade

Some of her other matches