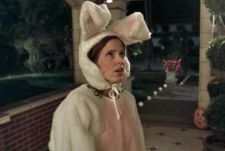 I really liked Anya from the moment that they made her into a recurring character. I did like the ‘Wish’ episode in which she was a demon, and first introduced, but it wasn’t until the writers made her into a human girl, and had her connect with Xander that she really became interesting to me.

There was something enormously endearing about her attempts to win him over, and her confusion over certain social conventions, allied with her bluntness made her one of the funniest characters in the series.

A compilation video of some of her funniest moments, by MrMorda898

Caufield didn’t just play her for laughs though, the writers giving her one of the most moving speeches within ‘The Body’ after Joyce’s death. The way that she delivers it, always makes me cry. The speech posted on YouTube by Buffy the Vampire Slayer

I liked the fact that the writers, and Caufield took her from a character who didn’t care about anyone, running away from Sunnydale during the third season finale, to a fully fledged member of the Scooby Gang, who was prepared to risk her life for others.

Her death in the seventh season finale, was one of the saddest ones in the entire series, and that’s saying something considering how many characters were killed off during the show’s run.

I found this video by Hunter Caulder showing the impact that Anya had. She’s included in the video with Jenny Calendar, Joyce Summers and Tara, three other characters that I think were well drawn. The tribute video