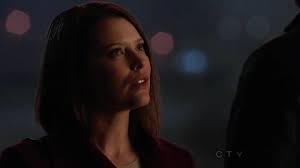 Lyla’s not in many episodes, although she has a strong tie to John Diggle, the two are currently on their second marriage to each other, and are the parents to Sara. It’s something small that I really like about Lyla. I hadn’t really paid much attention to her, in the handful of appearances she had throughout the first and second seasons, until the finale.

She was clearly courageous, as shown in the episode featuring Captain Boomerang, but it was made crystal clear in that episode.

Hanging out of the door of a helicopter, she uses a rocket launcher, to blow up a bunch of Mirakuru soldiers in the clock tower, in one of the most memorable moments of that season.

I like the fact that the writers and Anderson have made her into a more morally ambiguous character than most of the other women allied with Team Arrow. She can see things in a slightly less black and white way than her husband, more in line with Oliver’s perspective.