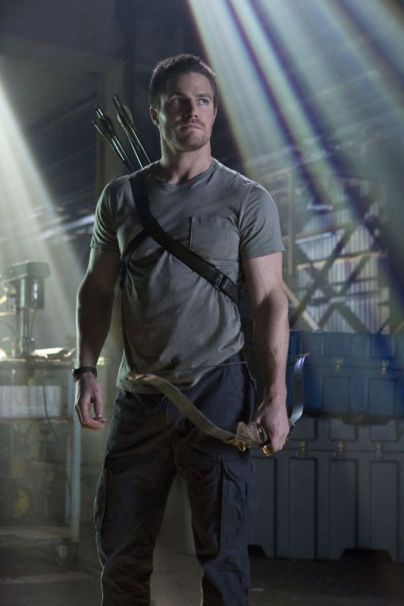 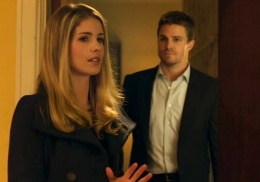 ‘She’s the one that lights my way’

This pairing were only meant to originally interact for one episode, during the first season, but due to the way that Emily Bett Rickards played the role, investing Felicity with so much warmth, and the chemistry which existed between her and Stephen Amell, the character grew in importance throughout the seasons.

I’m very grateful for that, because they are so adorable. I love the mix of characteristics that the writers have placed in Felicity Smoak. On the surface, she’s a bundle of sunshine, socially awkward with her babbling, and clearly possessing a near genius level intellect. However there are many layers to her, and the contrast between her sunny demeanor, and the understandably more pessimistic world view that Oliver Queen has been endowed with, in the Arrow universe, is one of the things I like most about this couple.

I like it when a couple’s differences, help level them both out. Neither character is perfect, but they help each other progress and become better versions of themselves. Oliver is evidently more able to express his emotions, due in part to his relationship with Felicity, and friendship with Diggle. He confesses more to her, than any other character, about what he feels which is how a couple in a adult relationship should ideally function. There might occasionally be things that you’d rather discuss with other people in your life first, but part of the point of being in a healthy relationship is that you can rely on the other person to support you in weak moments. Clip uploaded by Olicity Queen

It’s in part that reason why I don’t think that the Arrow version of Oliver and Laurel would ever truly make each other better. The basis of their relationship seemed to be inherently flawed, with deception. I mean in the flashbacks we have seen that Oliver consistently cheated on Laurel, and did so at least once with her sister Sara.

The writers have created a romantic relationship between Felicity and Oliver by contrast which is based on friendship. The development of their connection happened on screen, allowing viewers to see each stage.

Their first meeting was in the third episode of the first season, and it was clear from her first reaction to his lie, that she was someone that was not going to let him get away with things. Lovely 1st meeting

The writers have Oliver come to Felicity more and more often, for things, the trust he has in her increasing until he finally lets her in on the secret, after his mother has shot him. posted by Olicity Queen

I liked the fact that Felicity doesn’t freak out all that much, or seem all that phased by the realisation that her boss, is the Arrow, bringing criminals to justice. She’s calm and even understands, in the middle of Oliver potentially crashing, that it’s just loose wiring in the machine.

She agrees to become part of the team, but only in under her terms. Something that Oliver accepts, and he shows how much he cares about her, during the following episode. The two have a differing opinion on what could make the city better, and she refuses to allow him to leave until she has expressed hers posted by Olicity Queen

The two of them clearly have more than friendly feelings for each other beginning in season two, as we see first Oliver get jealous when Felicity shows a interest in Barry, posted by Olicity Queen and then Felicity gets insecure when Oliver starts another romance with Sara. Her insecurities are not really to do with the fact that she’s jealous of Sara being the one dating Oliver, it’s more about being displaced, seeing as Sara can do some of the same things, and is extremely capable in combat. Posted by Olicity Queen Their reactions to the potential disruption within their relationship, feel true to who the characters have been up to that point. Sweet moment between Oliver and Felicity, and between Felicity and Diggle

It’s quite realistic that the two of them don’t actually acknowledge the fact that they love each other until season three. Oliver clearly has some changes to make, when they first meet, still coming to terms with coming back from the island, and he also is involved with a number of different women throughout the first two seasons.

He has been described as being the less evolved version of Diggle, in that he is yet to learn how to trust his partner, and be able to build a family life even while continuing to defend the city. There is some truth to that, especially given the fact that his experiences during the five year absence from his home town, whether on the island itself or not, clearly damaged his ability to confide and trust others. His default setting seems to be to protect his loved ones, by making decisions for them.

It makes sense on Felicity’s side as well, given that the writers have given her a absent father, and that would impact the way that someone would view romantic relationships. She has the inner strength to walk away, despite the fact that she clearly has strong feelings for Oliver. The scene between them in the third season premiere, in the hospital is beautifully shot, and very well written Their first kiss and first break up

I was surprised that the writers chose to have Oliver say ‘I love you’ first. He says it three times, I think before 3.20 posted by Olicity Queen. It’s a reminder of just how far the character has come from the emotionally repressed and understandably damaged person who refused to confide anything in his sister during the first season.

It’s the most recent season though that has had Olicity, as officially canon, and I’m loving it more than the previous seasons.

Felicity has learnt to confide in Oliver more, revealing how she’s feeling about certain things, she reveals her feelings over the death of Ray, to Oliver in this clip uploaded by Olicity Queen

For me, this romantic pairing shows what love can do, the two of them both grow and change because of their bond. Oliver acknowledges just how much he relies on Felicity, just before the proposal in the season four I love this proposal scene