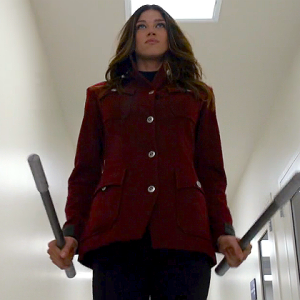 Bobbi’s another remarkable female in the series. She’s mentioned a couple of times before we see her on screen, and I was surprised to see Adrianne Palicki playing her. The only time I’ve seen her on screen before, that I remember is as Jessica in Supernatural, and we didn’t see that much of her. She certainly wasn’t a character that got involved physically, with the action scenes, and so when Bobbi had the fight with the two guards, I was a little taken aback, but also pleased to see another clearly physically strong woman in the series. Impressive reveal of Agent Morse

Palicki hasn’t disappointed since then, impressing me with both her stunt work, and the emotional scenes. I really like the fact that the relationship between Bobbi and Hunter is somewhat different to traditional gender stereotypes, as it seems as though he’s the one that wants to commit, and she’s the one holding back.

The moments of vulnerability, although few and far between, were a nice thing to see, as May was already the strong and stoic female in the main cast. If the show was going to bring in another agent, then it would have been pointless bringing in someone who behaved in the same way, and boring for the audience.

The undoubted physical strength, and inner steel that Bobbi displayed through season two was in full show in the scenes when she was captured by Ward and Kara. I mean how on earth did she manage to fight them both, withstand that pain, and still save Hunter’s life by taking a bullet? Selfless and courageous moment

I’ve not yet seen any of season three but I will be watching, to see what happens to Bobbi in the future, I hope that the character stays in the show for a good while to come.