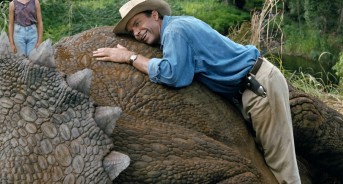 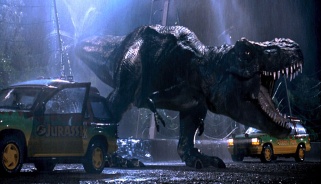 I love this film, it’s got incredible special effects, and I remember liking the fact that Lex, the elder of John Hammond’s grandchildren is instrumental in saving the survivors in the final few scenes, when I was a kid. I was eleven or twelve when the film first came out, and was blown away by the special effects, the first time that the dinosaurs are revealed, was just as awe inspiring for me, as it was for the characters. Extraordinary!

My brother had a fascination with dinosaurs, like so many boys developed after the film came out. I can’t quite remember if he liked them first, and then developed a greater fascination after watching the film, but he did have loads of models. Anyway he had a Triceratops before the film, and I was fascinated by the fact that the film makers had somehow managed to make a living and breathing version of the animal onscreen.

I’ve come to realise that Dr Grant’s not exactly the best person to deal with kids though, the scene with the little boy at the dig shows that he’s incredibly short tempered at the start. How did the kid get to the dig?

There are plenty of impressive stunts, and the special effects still hold up today, a truly remarkable thing seeing as it’s 22 years old. I remember several scenes vividly, despite not having seen it for quite a few years. The scene just before the T Rex is revealed to have escaped has been parodied quite often throughout the years, with good reason, How did they do this?

The scene with the kids and the raptors in the kitchen, has stuck in my mind too. How would you stay calm with raptors so close? I remember being in awe of the kids thinking so clearly in such a dangerous situation, the first time that I watched it.

It was realistic, the reactions of certain characters, I mean you would hope that you would react like Dr Grant or Ian Malcolm, if children were in danger, but it’s understandable that the flight mode would click in first.

The warmth that Richard Attenborough brought to the role of John Hammond is one of the reasons that I’m really glad that they didn’t stick rigidly to the book, and let him make it all the way to the end.

All of the performances that I recall were good, but Goldblum’s sarcastic and yet heroic mathematician, Attenborough, and Ariana Richards’ playing Lex were my personal favourites.